Hulu once had a free version alongside the paid one. Now they’ve turned their business model wholly into a subscription-based streaming service, much like the other streaming giants such as Netflix and Amazon Prime Video. While these companies bring a lot of quality content to a user’s table, they may not be for everyone, especially the tightwad cord-cutters whose personal expenses seldom include entertainment charges. Thankfully, a legion of free streaming services is available today.

Speaking of free streaming services, just last year, I tried tracking my favorite shows on Hulu that I enjoyed without shelling a penny; and mind you, there were quite a few good ones. Remember the CW Superhero Shows (based on DC Comics)? To be able to stream those at no cost was no less than a blessing. Soon I realized that it was sealed behind Hulu Plus’ paid plans (now just “Hulu”). But Hulu wasn’t going to let go off any of their audience that easily. Not too long ago, they partnered with Yahoo! to shift majority of the free content to Yahoo!’s platform.

How Did Yahoo! Come into the Picture?

Many of you perhaps don’t know that Yahoo! View is not the company’s first attempt at providing a video on demand service. Originally Yahoo! had launched a video hosting service by the name Yahoo! Video. This was later turned into a platform for watching well-curated video content. The same service was re-branded as Yahoo! Screen in 2011, focusing more on in-house production and web series. By the end of 2013, Yahoo! Screen had 1000+ hours of shows but unfortunately, it did not receive much acclamation from viewers and the company was forced to wall it off. Finally, Hulu came to the rescue and associated with Yahoo! to ultimately establish Yahoo! View. The latter is basically the scion of erstwhile Hulu. However, an interesting thing to note is that Yahoo! View is not an exclusive distributor of Hulu’s free content. You’ll also find some of its content on Comcast, EW, and New York Magazine. 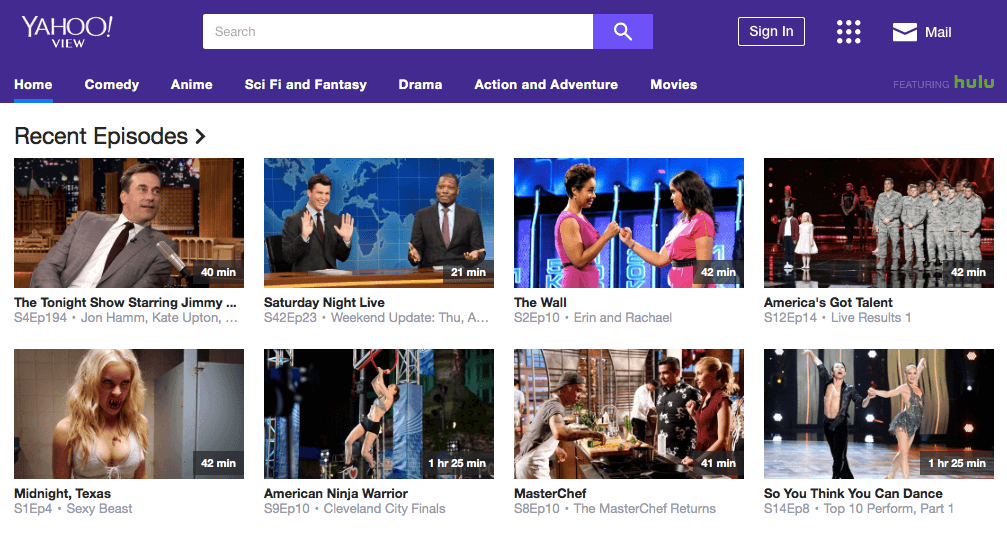 You’re in luck if you like watching anime. Yahoo! View has an impressive collection of Anime series ranging across genres like Action, Comedy, Drama, Fantasy, Romance, Horror, and Sci-Fi. Even some of the most well-known ones like Attack on Titan and Naruto are available in the library.

For everything else, you might feel a bit let down given that not all the content from Hulu’s free version is available on the platform. Thanks to Hulu’s agreements with TV networks like ABC, NBC, and FOX, users can stream five most recent episodes about a week from official airing. We did come across a few popular shows like Saturday Night Live, The Tonight Show Starring Jimmy Fallon, So You Think You Can Dance, America’s Got Talent, Masterchef, and Gotham. Other notable series include Scandal, Shark Tank, Brooklyn Nine-Nine, Empire, and How to Get Away with Murder.

An important point to note is that Yahoo! View does not feature full-length episodes for many of the aforementioned series. Instead, there will be short clips, which is as good as not watching it at all! Aside from American TV series, the service also features Korean, British, and Latino drama series.

The one category that’s hugely disappointing is “Movies”. We couldn’t find a single known title in their catalogue. Most of them are either too old or B/C-Grade movies. These small-banner films may not be the worst, but they’re definitely unknown to most people. However, if you love watching movie trailers, the platform has plenty of those so you’re always updated about the upcoming flicks.

This is where Yahoo! View stood out for us. For a free service, it does boast of an almost bug-free platform supplemented with a very vibrant color-scheme of purple and yellow. On the homepage, major category tabs like Comedy, Anime, Drama, and Movies can be located right at the top, making navigation and selection an easy process. If you scroll down, you’ll notice that the content is arranged into sub-categories such as Recent Episodes, Nerd Comedy, Popular Shows, and Recent Clips. When you click on a thumbnail, it’ll display details such as the genre, plot summary, and an option to add the title to “My Shows” for watching it later. Although there is an option of signing up, it’s not mandatory to begin streaming content.

The video player is just like the one on Hulu so you know it will be good. Buffering issues are minimum and responsiveness of the player is maximum. In fact, you’ll even find the option of customizing the subtitle as per your preferences. Having said that, there’s no way to adjust the video quality and that can be a deal-breaker for many.

All in all, the experience was quite smooth and hassle-free, although there is surely more scope for improvement.

As of today, Yahoo! View is available only in the U.S. and can be streamed only on iOS and Android devices. We can only hope that they expand their range of supported devices in the near future.

Whenever it comes to free services, there’s always a big “but” and Yahoo! View is no exception. Since there are no monthly subscription charges, advertisements are the only source of revenue for the service. Even though these ads aren’t too long, they can get a tad bit annoying if you plan to binge-watch.

Honestly, its quite straightforward. If you are a movie/TV buff who loves keeping up-to-date with the latest stuff and are looking for an all-in-one kind of a streaming service, Yahoo! View isn’t for you. On the contrary, if you were an avid Hulu (free version) user, you’d perhaps really appreciate the service.

One thing that you may not know but must know, is that Yahoo! View is soon to be acquired by Verizon. This will obviously affect your experience as far as the interface and content is concerned so go ahead accordingly. We’d suggest that you give Yahoo! View a try since it’s free. Later, you could perhaps supplement it with another paid service to get the best value in terms of content.