Do you want to use any iOS app but don’t have an iPhone? Don’t worry, as today I will be sharing how you can iOS apps in your PC/Computer using iPhone Emulators. I was getting many queries regarding best iOS Emulator For Windows using which one can run iOS apps in Windows. So, If you are looking for the same, Keep reading the article as I will list all iOS based Emulators which is available for Windows platform.

What is iOS Emulator?

An iOS emulator is a software that enables one computer system, known as the host to behave like another Operating System, called the guest by enabling the host system to run the software or use devices that are originally developed to be used by that particular OS. Putting things in perspective for this specific discussion, an iOS emulator will enable a windows based computer to emulate or imitate an iOS based device through certain specific programs that have been specially created for this purpose. Through the use of these emulators the app developers can test their programs before coming out with commercial versions of the same as well it allows the users of windows to use these towards using the iOS games or apps or to create iOS apps on their PCs.

Although these two words ‘Emulator’ and ‘Simulator’ is understood to be meaning the same, in actuality, these are quite different from each other. To put it simply, emulators actually mimic the software and hardware environments found on the corresponding host devices, whereas the simulators only mimic the software environment. Towards that end, Simulation is generally used for analysis and study whereas Emulation is used for using a particular device as a substitute or to get the exact experience as that of the device that is being emulated. Therefore, it will be quite correct to say that an Emulator is a combination of hardware and software, thereby providing more realistic behaviour whereas the Simulator is only software based. One analogy, to understand the subtle difference between the two could be to imagine that you are trying to tell your friend that it will be fun to jump in an ice cold pool. To simulate it, you pretend to jump into the pool yourself and enjoy the cold water by enacting how it would feel. To emulate the same, you actually jump into the pool.

I think you have already got enough idea about emulators & simulators. – What they are and how it will serve your purpose. So, Let’s discuss about best iOS/iPad Emulator for Windows without any delay now.

There are dozens of emulators for iOS available for Windows PC and it’s really very difficult for most of us to find best one for our personal use. But don’t worry as our team had researched about iOS Emulators & simulators in-depth before writing this article, so that you can easily select best iPhone emulator for Windows PC from the below list.

Although with the rapid development of technology and the interconnectivity of operating systems, there are various programs that have been developed to work as iOS emulators; the following are some of the better-known ones that have been received quite well by its users.

MobiOne is considered among the most versatile and easy to use software that allows the users to emulate various iOS apps with ease as well as developing iOS applications. This program has been downloaded by more than half a million designers and developers since its launch in 2009 and has multiple unique capabilities such as customised user interface templates that use the drag and drop function for both portrait and landscape orientations that can also be modified. Through the App Sync technology, MobiOne also supports large sized apps for review and testing. Through the use of common text messaging, users can also transfer their apps directly to any mobile device.

Update – This iPhone Emulator is officially discontinued now but you can still install it in your computer by downloading EXE file of it from third party sites.

Smart face is among the most popular iOS emulators that offer basic functions for Windows OS and allows the users to develop unlimited apps absolutely free of cost. It is extremely easy to use this program too. All that one needs to do is to install the app on the host device through the app store and then connect it to the windows system. It is important that the Windows device should have the iTunes installed so that the two systems can work in sync. Once the iOS is emulated onto the Windows device, the developers can then develop native applications through Smart Face. There is also the function to debug your apps with useful debugging features such as real time code changes and breakpoints etc. As an app developing software the program is quite adept at providing the capability to the users to test the applications in various iOS environments. Although we are discussing only the iOS in this article, it is worthwhile to know that Smart face can also be used with the Android platform with equal efficiency.

Air iPhone Emulator is widely regarded to be among the top programs to create extremely realistic emulation effects. This program functions with the support of the Adobe Air framework that recreates the Graphical User Interface or GUI of the selected iOS on the Windows platform computers. This program is of great importance to the developers who can upload their newly developed applications to the Air iPhone emulator before releasing it to see how it looks and feels like. Although there are various features available on this emulator, some core applications such as the Safari Web browser are not available and that constraints its use. Air iPhone emulator was originally designed to allow users to make and receive free calls through Ribbit, a telecommunications service that was used mostly by developers to connect with telephone networks. Ribbit was acquired by BT in 2008 and the communication features are no more functional. 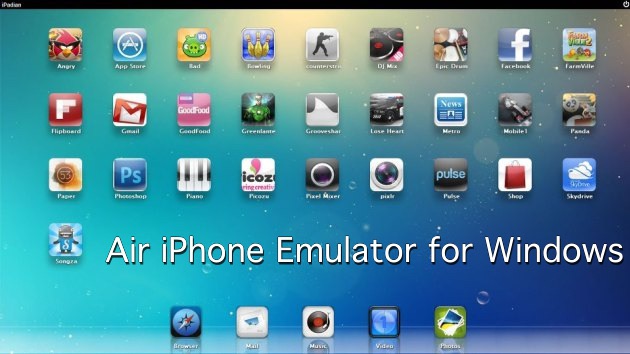 The iPhone simulator works on the flash and is considered among the foremost apps when it comes to the ease of use and the brilliance of the interface. Although this app does not give access to some crucial iPhone apps such as the App Store or the Safari browser, it is still quite handy when it comes to having an access to the other more popular applications such as notepad, clock, calculator etc. Whereas it seems that this simulator is using the iOS, it is basically a flash application and has its natural limitations. Although this program might not be very useful for the app developers for advanced features such as debugging etc., it is still quite handy for those that want to experience the iOS environment before deciding to invest in an iOS device.

As the name suggests, iPadian is a software program for Pcs that are running Windows XP or higher to easily launch an alternative desktop that looks like an iPad screen. In the true sense, therefore, iPadian is not really a true emulator, but rather a simulator. iPadian is actually a desktop application that is based on the Adobe Air platform and cannot run without that being first installed on the computer. Since it is not possible to access many of the native iOS apps on the iPadian, it comes with its own app store which is a set of apps that can run on windows and give the user a feeling of using the iOS apps. iPadian also has some major interface challenges since it tries and emulates the iPad which has a touch interface and when it is rendered on PC, it doesn’t quite give the same experience to the users since the touch screen swipe function cannot be perfectly emulated.

Some features of iPadian for PC:

How to Install iPadian in Your Windows Computer:

Once, you have successfully installed iPadian in your Windows Computer. You will see iPadian icon on dekstop.

In this post, I will not cover how to setup this emulator as developer of Xamarin Testflight has written detailed tutorial on the same on their official blog.

Appetize.Io is one of the best iOS Emulators for Windows. Note that it is cloud based emulator and you can not download it in your PC/Computer. Earlier, there was an iPhone emulator known as App.io but it is not available any more. So, if you are looking for App.io alternative, then Appetize.io is a must-try. It is available for free for first 100 minutes per month. After that you will be charged $0.05 per minute which is very reasonable too. Note that you will not be able to install any app in the emulator as it’s demo based but you can test .ipa files in it.

To use it, just upload .ipa file in the upload form and enter your email address. You will get a link in your mail inbox. Just click on it to test your .ipa file in the Appetize.io online Emulator.

We can easily derive from the above article that whereas it is not possible for many people to afford the iPhones or other Apple devices due to their high cost and availability in certain geographies, it should not inhibit people from being able to access the look and feel and the experience of using a high-end Apple device. Through the use of these emulators, one can easily access a virtual Apple device on their Windows desktops in a matter of minutes and free of cost and can easily use iOS apps on their Windows PC. It is also a great tool for the app developers to develop and test their apps in the real OS environment and fine tune them before launching.